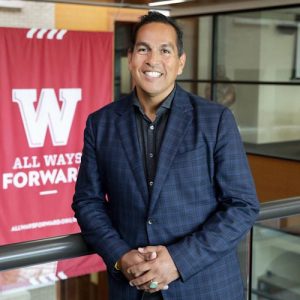 Aaron Bird Bear is a citizen of the Mandan, Hidatsa & Diné nations (enrolled in the Three Affiliated Tribes of the Fort Berthold Reservation) and has served as the Director of Tribal Relations at the University of Wisconsin–Madison since November 2019.

He came to UW–Madison in 2000 as the American Indian Student Academic Services coordinator in the College of Letters & Science. From 2009 to November 2019, he worked in the School of Education, most recently as an assistant dean responsible for leadership around recruiting, supporting and retaining historically underrepresented undergraduate and graduate students. His role as an assistant dean included overseeing the College Access Program for high school students and the American Indian Curriculum Services unit, which coordinates the school’s efforts to integrate American Indian studies into teacher education programs.

In 2003, Bird Bear helped develop the First Nations Cultural Landscape Tour, a place-based, experiential education tour of American Indian landmarks on the UW–Madison campus. He currently co-leads a group that is creating signs honoring the Native presence on campus, including the new “Our Shared Future” marker on Bascom Hill that recognizes the land as the ancestral home of the Ho-Chunk.

Bird Bear earned a bachelor’s degree in physical oceanography from the University of Washington in Seattle in 1995 and a master’s degree in educational leadership and policy analysis from UW–Madison in 2010.